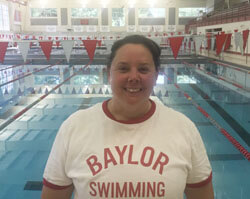 Coach Kelly McClanahan, native to Cleveland, is an alumnus of the Baylor School. During her time at Baylor, she was part of four state championship teams and a NISCA High School All-American. Kelly was also a member of the 400 Free Relay state record team. Upon graduating Baylor in 1996, she continued her studies and swimming career at the University of Louisville.

McClanahan focused on graduating well-rounded athletes, with academics as the driving force. During her tenure the Bears produced 11 straight semesters ranked as a CSCAA All-America Team, with their highest ranking in 2015 placing 5th amongst all Division I Swimming & Diving programs. The Bears produced 76 All-Academic MPSF and WAC conference honors, 1 NCAA Honorable Mention Academic All-American and nine student-athletes maintained 4.0 GPAs through graduation.

McClanahan joined the Bears from the University of Wyoming, where she was an assistant coach from 2005-09. During her four seasons with the Cowboys & Cowgirls, she guided the sprint program to 12 school records, 57 all-time top 10 swims, four NCAA-B qualifiers, one World Trial qualifier and four US Open/Summer National qualifiers.

Prior to Wyoming, McClanahan was at the College of Charleston from 2003-05 as the assistant coach. At Charleston, McClanahan helped guide the Cougar swimmers to 10 school records.

McClanahan has also worked with elite coaches at nationally renowned swim camps. In 2004 she coached at Arizona State University’s and University of Southern California’s swim camps.

Currently, Kelly has an 11-year partnership with US Sports Camps, and is the Director and Head Coach for the University of Colorado Nike Swim Camp.

McClanahan is a long standing member of the American Swim Coaches Association with a Level 4 coach’s certification, USA Swimming, American College of Sports Medicine, Women Leaders in College Sports and WeCoach. She began her swimming career at age 11 with the Cleveland Aqua Tigers, and at age 13 made the journey south to join the Greater Chattanooga Aquatic Club.