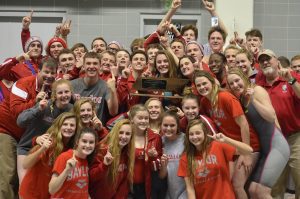 CHATTANOOGA, TN- The Baylor School Boys and Girls Varsity Swimming & Diving teams were named by the National Interscholastic Swim Coaches Association (NISCA) as 2017-2018 National Independent School Dual Meet Champions.  The NISCA awards program is based on submitted team results of high school athletes (grades 9-12) that are translated into power points.  A total of 349 high school teams from across the nation participated in the national dual meet ranking system this year.  There were only two double winners this season, and the Baylor School was recognized as one of those teams.  The only other team to take the boys and girls titles was Carmel High School (Carmel, IN) in the public school division.

For the fifth time, and for the second consecutive year the Baylor School Varsity boys took the title in the Independent School Class 11 racking up a total score of 6,004 points.  The Bolles School (Jacksonville, FL) finished second with 5,678 points, and the Pingry School (Basking Rdige, NJ) was third.  In 2016-2017 the Baylor School Varsity boys also finished with the title scoring a total of 6,069 points. 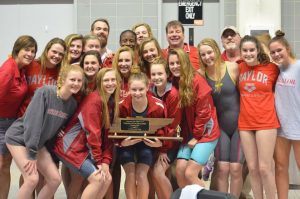 The Baylor School Varsity Girls also came away with the Independent School Class 11 Championship, scoring a total of 5,855 points.  The Bolles School (Jacksonville, FL) finished second with 5,807, and Pine Crest (Ft. Lauderdale, FL) took third with 5,370 points.  This is an enormous improvement from the 2016-2017 season as the Baylor School girls finished seventh in the dual meet rankings scoring 4,805 points.