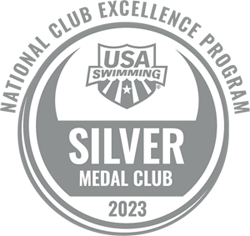 What exciting news! The Baylor Swim Club has been awarded by United States Swimming the distinction of being a nationally ranked Silver Medal swim club in the USA Swimming Club of Excellence program for the 2023 swimming season!

What exactly does this mean? This means that Baylor Swim Club is recognized as one of the top clubs in the country based on organizational professionalism and athletic performance. To qualify for this award, Baylor had to submit an extensive report to United States Swimming, documenting club professionalism as well as both national and world-class performance.

“To be named one of the top 75 clubs in America and a USA Swimming Silver medal club is an honor our entire club should be proud of. The athletes’ posting times for this honor represented all four strokes and events ranging from 100 meters to 1500 meters. Our club values the overall development of the athletes at all ages and this is a testimony to fulfilling that philosophy.” – Laura Pitman, Director of Operations