STANFORD, CA- This past week (July 30 – August 4), four Baylor Swim Club athletes competed in the 2019 USA Swimming Phillips 66 National Championships held at the Stanford Avery Aquatics Center in Stanford, CA.  Many of the very best swimmers from across the country participated in the five day event.  The Baylor Swim Club had a strong showing overall highlighted by some great performances from Addison Smith and Ellie Waldrep.

Princeton University bound, Addison Smith claimed her 5th 2020 Olympic Team Trials qualifying time this year.  This time she did it in prelims in 400-meter Individual Medley posting a time of 4:51.21.  She now has cuts in the 200 free, 400 free, 200 fly, 200 IM, and 400 IM.  This is the most Olympic Trials qualifying times acheived by an individual in different events in Baylor Swim Club history.  Smith participated in the 18 & Under D-Final in the 200 free, 400 IM, and the 400 free.  She also claimed 31st overall in the 800-meter freestyle. 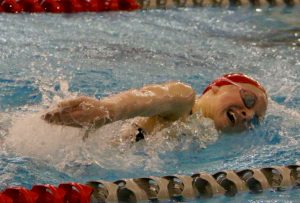 Gator Trey Freeman.  Freeman finished 11th in the 400-meter freestyle, and took 15th in the 200 freestyle.  Freeman is just coming off representing Team USA at the 2019 World University Games that was held in Naples, Italy earlier this summer.

Cecilia Porter swam to a new team record time of 1:09.94 in prelims in 100-meter breaststroke.  She ended up finishing in 31st overall with an 18 & Under D-Finals swim.